In line with the issues highlighted by the European Commission in its on-going investigation of Luxembourg state aid cases, the Draft Bill also includes additional amendments to the domestic law to eliminate double non-taxation. The proposed changes affect tax neutral exchanges and the domestic definition of permanent establishment (“PE”). The Draft Bill is yet to be approved by the Luxembourg Parliament and may thus be subject to amendments. Lastly, the Luxembourg Government also approved a bill for the ratification of the Multilateral Instrument (“MLI”).

ATAD aims at implementing the recommendations made under OECD’s Base Erosion and Profit Shifting Project (“BEPS”) at the EU level. It lays down anti-tax avoidance rules in the following fields:

For more information about the EU Anti-Tax Avoidance Directive and its transposition into the Luxembourg domestic law, please contact our tax experts, Jean-Michel Hamelle and Jean-Nicolas Bourtembourg. 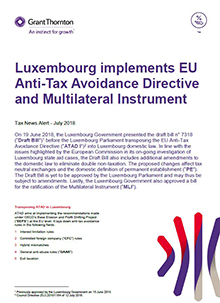